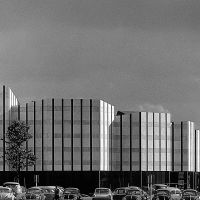 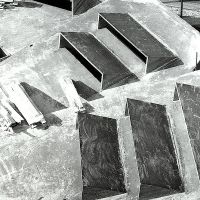 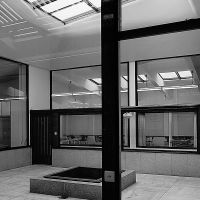 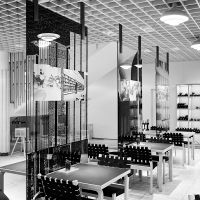 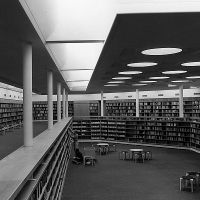 On 1st July 1958, the exact date of the 20 year jubilee of the town of Wolfsburg, the decision was made in a ceremonial meeting to give Alvar Aalto the contract for the planning and construction of the Cultural Centre. Aalto received the project without contest, the alternative design by Paul Baumgarten not being able to fulfil the emotional expectations of a young city seeking its identity in building projects because of Baumgarten’s reserved functional coolness. The politicians and administration of the city had unlimited confidence in Aalto’s capabilities, something from which he profited in the following four years. The comparatively slight alterations in the design concept which arose from the fine tuning according to the projected use of this building, were encountered by an unconditional willingness to extend the budget and the time frame more than once in order to enable Aalto to carry out his project to perfection. “A project in which the practical and functional elements are held in balance with artistic imaginative creativity and which represent symbolically the creative intentions of the city”, as summarised in the certificate of dedication.

Equipped with a superior quantum of idealistic and architectural strength, the Cultural House opened its doors in 1962 and caught the spirit of contemporary society. The three cultural facilities, Library, Adult education centre and Youth club reached towards one another in perfect balance and reciprocal inspiration under one common roof. Alto succeeded in giving each of the facilities its own special spatial characteristics and atmosphere, integrating it, however, at the same time into a part of one airy ordered unit. In its exterior contours the building corresponds to the various urban development conditions. The polygonal main foyer leading to the Town Hall Square in the north and the raised-floor, fan-shaped offset lecture halls of the upper storey form the “dominant head” of the building. The west flank on the Porsche Street forms a line of retail businesses with a colonnade under a discreet row of administration rooms, the southside with its protruding courtyard of the children’s library serving as a transition into the landscape area of the Klieversberg. The design of the roof is considered as the fifth façade, its spatial centre in the upper storey forming a triangular enclosed terrace with an adjoining room with a fireplace which can be converted into a further exterior area through an extendable roof and façade elements.

The concept of a compact combination of functions under one roof still proves its efficiency today. Of the three original facilities, only the library remains in the building; it has absorbed parts of the former youth centre as well as two small flats on the upper floor for administrative offices. The lecture halls are used for special functions, and business units of the City of Wolfsburg are located in the building. As part of a reorientation, a bistro was set up in the south foyer in 2001. Hence, the building cannot be accessed any further through that space. In addition, the steadily expanding library is to be offered a perspective for further development in the building in the medium term.