In Germany, Wolfsburg presents the central work of Alvar Aalto with its three buildings. The aim of the Alvar Aalto Centre, according to its constitution is to convey to the public the structural and architectural theories as seen in his architecture and to preserve his buildings.

The Society undertakes all necessary measures to maintain the buildings with professional methods of protecting historical monuments, restoring and further developing the three buildings in Wolfsburg. It voluntarily faces up to matters and critique arising from such questions.

Guided tours to Alvar Aalto's buildings are offered by the Society to there visitors who are interested in architecture in the context of Wolfsburg's historical development. At intervals publications are produced on Alvar Aalto's work and the architecture of the City. 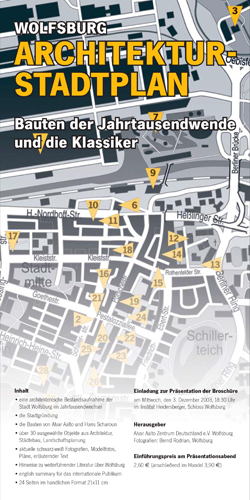 This brochure presents an architectural survey of the city of Wolfsburg at the turn of the millennium on the basis of selected individual buildings without claiming to be exhaustive. It is to be seen as a necessary supplement to the 1996 publication »Architektur in Wolfsburg« by Cornelia Thömmes. At the same time, however, it also provides an introduction to the city's founding history and presents the buildings of Alvar Aalto and Hans Scharoun.

Information on architecture and town planning of the city of Wolfsburg in the publication titled »Architektur in Wolfsburg«. This book especially describes monuments, architectural ensembles and other buildings that have a profound impact on the city's appearance. Using photographies, short texts, and plan views, a total of 46 buildings are documented. The buildings of Alvar Aalto are also displayed comprehensively.

The sketchbook presented as a draft in the Alvar Aalto exhibition in the Berlin Pavilion (winter 1998/1999) contains drawings by Alvar Aalto for the Cultural Centre in Wolfsburg, today Alvar Aalto Culture House. First urban planning idea sketches, technical drawings in different scales up to detail drawings in the scale 1:1 are printed in each case on a high-quality transparent paper. The sketchbook has an exclusive character due to the choice of materials and workmanship; only 250 numbered copies were printed. The book folder and the selection of technical drawings were designed by Manfred Steffen, Cornelia Thömmes and Wolfgang Wittig.